When a muslim hears thats someone has died, this is the most common thing that is said:

"Indeed we belong to Allah, and indeed to Him we will return."

This is the most common thing people in Islam say when someone dies. You'll hear people say it, you'll see pictures of the verse from the Qu'ran being sent around and it'll travel accross messaging mediums such as WhatsApp.

Feel free to copy and paste it if  you have just learned that someone has died.

For example if someone messages you either privately, in a group chat or on social media, the first you can say is this. But in this age of copy and paste a lot of young Muslims don’t know what it means even though they are spreading it,  so I encourage you to also send the meaning.

"Indeed we belong to Allah, and indeed to Him we will return."

Understanding that we are all created by and belong to Allah in the first place should help you come to terms with the fact that everyone will one day return to him, death is inevitable and normal.

Where does this come from?

This is directly from the Qu'ran, in the second Surah - Al-Baqarah.

It is part of a verse, which in full reads:

Who, when disaster strikes them, say, "Indeed we belong to Allah, and indeed to Him we will return."

As the verse implies, you can also use it in scenarios other than when someone dies in Islam. In fact, it can be used whenever a disaster or something terrible happens.

You can also remind the bereaved of the virtues of patience, make dua for the deceased to reach the highest heaven and make dua for their grieving family to find patience and peace.

After all, when someone has died, their families and loved one will need all the support they can get to cope with great grief.  What better way than Islam, which has plenty of reassurances, guidance and examples.

For example here's a dua you can say for someone who has passed away:

O Allah, forgive [name of the person] and elevate his station among those who are guided. Send him along the path of those who came before, and forgive us and him, O Lord of the worlds. Enlarge for him his grave and shed light upon him in it.

Related Ayahs from the Qu'ran

Here are a couple of verses of the Qur'an you can recite during condolences:

Every soul will taste death, and you will only be given your [full] compensation on the Day of Resurrection. So he who is drawn away from the Fire and admitted to Paradise has attained [his desire]. And what is the life of this world except the enjoyment of delusion.

Kullu man AAalayha fan
And there will remain the Face of your Lord, Owner of Majesty and Honor.

Everyone upon the earth will perish,
And there will remain the Face of your Lord, Owner of Majesty and Honor.

On the authority of Abu Hurayrah (may Allah be pleased with him), who said that the Messenger of Allah (ﷺ) said:

Allah (mighty and sublime be He) says: My faithful servant's reward from Me, if I have taken to Me his best friend from amongst the inhabitants of the world and he has then borne it patiently for My sake, shall be nothing less than Paradise. It was related by al-Bukhari.

"I heard the Messenger of Allah, while he was performing Salat for a deceased person. I could hear him saying in his prayer: (Allahummagfir lahu, war hamhu, waghsilhu bil-baradi (waghsilhu) kama yughsaluth-thawb) 'O Allah! Forgive him, have mercy upon him, and wash him with (snow or ice) (and wash him) just as a garment is washed.'"

Get the latest posts delivered right to your inbox 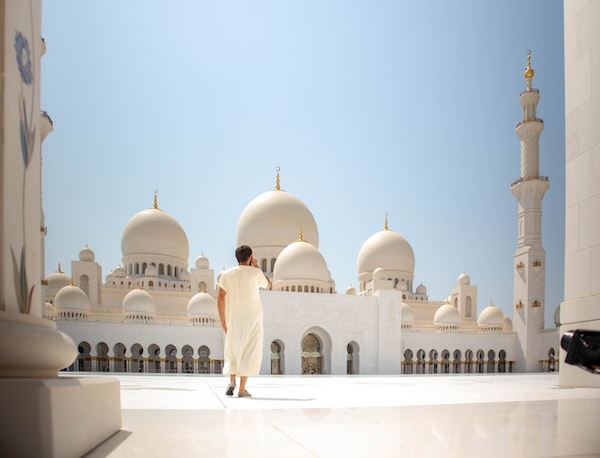 The Prophet (ﷺ) said, "Avoid the seven great destructive sins." The people enquire, "O Allah's Messenger (ﷺ)! What are they? "He said...

You've successfully subscribed to Muslim Moons - Become a Productive Muslim!
Could not sign up! Invalid sign up link.

Stay up to date! Get all the latest & greatest posts delivered straight to your inbox